See  https://www.sierraclub.org/borderlands/real-id-waiver-authority-compromises-our-borderlands for a list of the federal laws that the DHS Secretary has thus far waived, including the National Environmental Protection Act, the Endangered Species Act, and many more. “The waiver provision…is a grave threat to the checks and balances within the United States Constitution…continuing to allow this type of precedent to stand is a threat to environmental protection across the country, not only on the border.”

Update, 7/10/2018: “On top of the roughly 20 miles of wall currently on the levee near the river, CBP said in… letters [to landowners] that there will be approximately 25 miles of new wall [in Hidalgo County].” See the recent article.

Update, 3/26/2018: On March 23, 2018 President Donald Trump signed a $1.3 trillion omnibus spending bill (H.R. 1625 – Consolidated Appropriations Act, 2018) that provides $1.6 billion in new border security infrastructure, much of which is slated for the Rio Grande Valley. The bill exempts the Santa Ana NWR but threatens Lower Rio Grande Valley NWR properties as well as other protected areas with border wall construction.  Section 230.(c) of the bill reads, “None of the funds provided in this or any other Act shall be obligated for construction of a border barrier in the Santa Ana National Wildlife Refuge.” 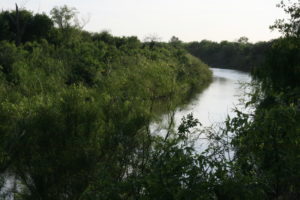 The Friends of the Wildlife Corridor is a non-profit environmental organization, and its concerns about the proposed border wall are based on the following investments we have in lands affected by the proposed wall:

We understand that SA NWR will not experience construction of a wall. However, construction of walls adjacent to this refuge, not to mention enforcement zone traffic and lighting, will disturb wildlife within the refuge. More importantly, as the only gap in the proposed wall, SA NWR may become a funnel for illegal immigration and trafficking, resulting in increased CBP activity within SA NWR, which would disrupt wildlife and interfere with the mission of the refuge.

The LRGV NWR consists of approximately 100,000 acres in multiple tracts of native habitat forming a discontinuous corridor along 275 miles of the river from Starr County to Cameron County. The three refuges of the South Texas Refuge Complex—Santa Ana, the Lower Rio Grande Valley, and Laguna Atascosa—protect what little native habitat in this region has survived agricultural and urban development. The native habitat is critical for a rich variety of resident and migrating wildlife species, and the region itself hosts 17 species that are federally listed as endangered or threatened.

Perhaps 19 tracts of the LRGV NWR will be affected by the proposed wall construction. Friends’ concerns related to the LRGV NWR include the following:

In addition, the Friends owns 9 tracts of property currently appraised at more than $380,000. The tracts were originally identified by USFWS as strategic properties to add to the refuge holdings, and the Friends purchased the tracts and is holding them by agreement with USFWS until USFWS can purchase them. Three of these tracts are already behind the 2006 border wall, and we are not sure yet how many of the remaining tracts—at least one of them—will be directly affected by the proposed wall. The border wall, whether it is constructed on one of our properties or isolates our properties between the wall and Mexico, will diminish the property value of our tracts and threaten their appeal to the refuges. The sale value of tracts behind the wall will be significantly reduced for a non-USFWS buyer, presenting a significant financial challenge for the Friends. 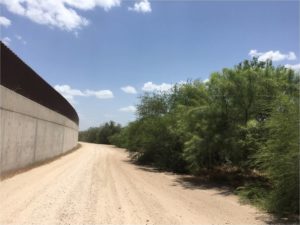 We are calling for your help to block that construction and ensure that elected officials understand the damage this wall will cause. Please do whatever you can to let people know that a wall through the wildlife refuges and protected lands is unacceptable. Please contact your own elected officials to express your opposition. 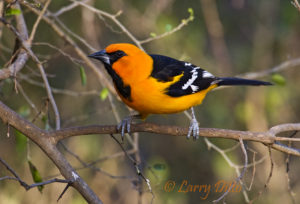 Please stand with us against the proposed border wall.

Fact sheet on the wall proposed through Santa Ana NWR and its effects on the habitat and the regional economy.

Template for a letter to urge decision-makers to reverse the rush to wall off the Refuge.

8-minute video made at the time of the initial fence along the border. The video makes a plea and describes facts that are as relevant now as in 2005. 7-minute video and article on the effect of U.S.-Mexico border fence on wildlife.

For updated media reports see posts on our Facebook page.