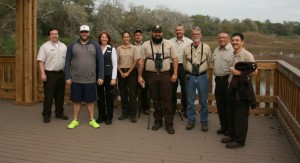 This morning, December 4, 2014, Santa Ana National Wildlife Refuge celebrated a great collaborative effort – the construction of the awesome Willow Lakes Boardwalk. This project was done with the cooperation of USFWS staff, Friends of the Wildlife Corridor, United Airlines Foundation, and a great team of volunteers.

The original boardwalk was damaged in the floods of Hurricane Dolly in 2010. This project started in the fall of 2012 with initial funding of $25,000 to buy beams and decking. In the fall of 2013 USFWS as well as volunteers and Friends of the Wildlife Corridor pushed through to get the job done!

The Friends applied for a $5,000 grant, which was awarded by United Airlines Foundation to buy hardware that is holding together the boardwalk.

Construction began in the fall of 2013 under the leadership of one of our talented maintenance staff, Alex Garcia. Alex led a team of four core volunteers dedicated entirely to the project. Alex coordinated the efforts of other staff and volunteers.

Volunteers invested over 2,000 hours! This equals a net value of $46,800.  The construction took approximately four months plus many months of planning.

This project was completed safely, without incidents.

The  boardwalk is solid, meets state code, and will be enjoyed by many Santa Ana NWR visitors of today and tomorrow. 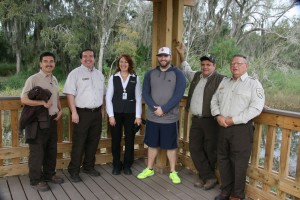