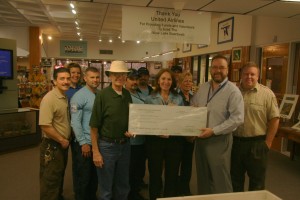 On Thursday, February 13th, employees from United Airlines’ McAllen office presented the Friends of the Wildlife Corridor with a check for $5,000 for the Willow Lakes project in the Santa Ana National Wildlife Refuge. The funding comes from United’s Eco-Skies Community Grant Program, which empowers United employees to make a positive environmental impact in the communities served by the airline.

Located south of Alamo, the 2,088-acre Santa Ana National Wildlife Refuge is home to nearly 400 bird species, half the butterfly species in North America, and many mammal species. This funding provides materials for construction of a boardwalk and wetland viewing stations over Willow Lake in the Refuge, allowing expansion of the lake and increasing capacity of the wetland to support birds and other wildlife. 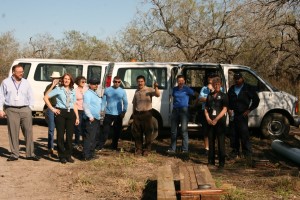 The new boardwalk will also give visitors, including teachers and their students, safe access for observation of the wetlands. The project receives substantial additional funding from the US Fish and Wildlife Service, and USFWS staff are overseeing construction while Refuge volunteers are providing much of the construction labor.

Art Tovar, USFWS Facilities Manager for the South Texas Refuge Complex, expects work on the boardwalk to be completed by the end of April.

The Friends of the Wildlife Corridor is a non-profit group supporting the Santa Ana and Lower Rio Grande Valley National Wildlife Refuges since 1997.