On May 19, 2015, the Junior Class of PSJA North High School presented a check to the Friends of the Wildlife Corridor in support of programs at the Santa Ana and Lower Rio Grande Valley National Wildlife Refuges. This year the check was for $1,700! 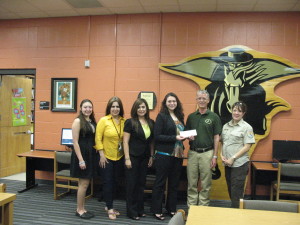 The officers of the Class of 2016, under the sponsorship of their Science teacher, Marie Santiago, and their principal, Linda Carrillo, led their classmates in a fund-raising effort to support the 2015 Junior/Senior Prom, with the intent that funds raised to exceed Prom costs would be donated to Refuge projects.

This is the fourth year that the PSJA North High School Junior Class has donated funds to the Friends of the Wildlife Corridor.

Richard Ramke accepted the check for the Friends, and Laura de la Garza attended the presentation on behalf of the US Fish and Wildlife Service.